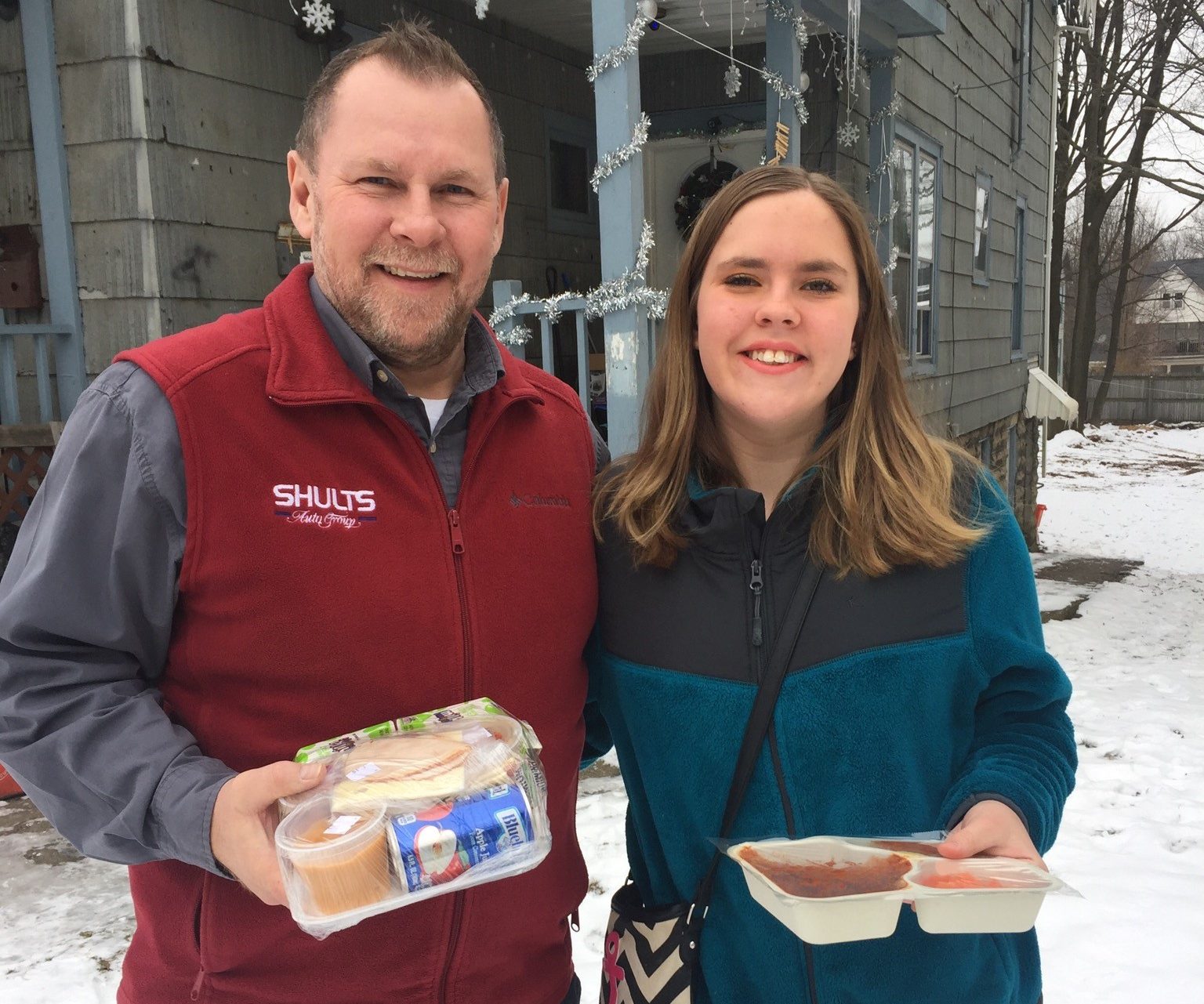 July 21, 1969 – not a date many of us attach significance to, but in the life of this agency though, this is the Meals on Wheels birthday.  On this day, three hot, balanced meals were delivered to elderly persons in Jamestown area.  The dream of Rolland Taft, Vaughn Rudy, Harry Bloom, and other community minded leaders had become a reality.

Volunteers have labored long and hard to develop the Meals on Wheels program. The founding fathers recruited dieticians, social workers, physicians, labor leaders and area citizens.  Everyone’s input was necessary, and everyone’s help was critical to the success of this venture.  Initial plans called for the meals to be prepared at Clair’s Dinerette, 19 E. Second St., and delivered by teams of two volunteers.  Each team was only expected to deliver five meals.  Volunteers had been recruited from women’s organizations, area churches and the Student Council at Jamestown High School.

John Alley, an active retiree from Local 338 UAW served as the director, and the city and the First Congregational Church provided space at 322 E. Fourth St.  Rolland Taft, executive director of Chautauqua Opportunities, served as the president of the MOWs Advisory Board.  Joining him as officers was Rev. John Soneson of the Chandler St. Baptist Church, Mrs. Robert B. Carlson and Dr. James P.B. Goodell.  As referrals were received, a committee from Meals on Wheels made personal home visits and obtained the participants approval before the meals were delivered.

By October of 1969 deliveries were provided to 19 persons and in January of 1970 meals were prepared at the Terrace Inn on Fluvanna Avenue.  By March 1970, 33 deliveries were being made, and requests from the outlying communities, (Celoron, Falconer, Frewsburg, etc.) were being received.

Chautauqua Opportunities, the Chautauqua County Commission on Aging, and the local UAW union all worked to staff the program with Senior Aides, and the UAW was instrumental in procuring 2 delivery vans to meet the increased demand for service.

Meals preparations moved through the Jamestown General Hospital kitchen, to Schyler Simmons Catering, the central kitchen at Washington School to DeBell Vending.  Delivery vans remain in use and volunteers continue to play a major part in the system.   The association with the county continued with the development of the Office for the Aging, and the UAW local still had representation on the board of directors.  Chautauqua Opportunities operated a rural home delivered meal program until 1995, when it decided to divest itself of the county’s rural deliveries.  Those deliveries were absorbed by the existing meal programs, including Jamestown Meals on Wheels.

Also in 1995, meal preparation went back to the Central Kitchen at Washington Middle School after a short time away.  From 2008-2011, the Chautauqua County Jail in Mayville provided meals to the program.

Now, Meals on Wheels continues to be a contract agent with Chautauqua County Office For the Aging – providing federal and state-funded home-delivered meal to eligible senior citizens in Chautauqua County.  A dozen delivery vehicles are used each day to get meals in the hands of our community’s neediest.  And meals have been prepared since 2011 by WCA Hospital staff at the Jones Memorial Health Center.  The health center is now part of the new UPMC Chautauqua hospital.

Last year, nearly 160,000 meals were served in the Jamestown Meals on Wheels territory.